Christos Chatzispyrou is an electric guitarist, composer and researcher. He completed his Masters Degree on Jazz Performance at the Guildhall School of Music and Drama, where he studied under the guidance of Martin Hathaway, Scott Stroman, Malcolm Edmonstone, Carlos Real-Lopez, Trevor Tomkins and Phil Robson. He also completed his PhD at GSMD researching the expressiveness of the electric guitar with use of the Ebow, inspired by the sound of the free jazz saxophone.

His first record “6 Tales from the City” (TidyLike Records, 2009) is a blend of his influences ranging from the Bird and Django to Pat Metheny and Greek traditional music, all from a Brechtian point of view, reflecting Christos’ ethos and roots.

Since 2008 he is a member of Ta Mère, a powerful Swing band, bringing the music of 1920’s and ’30s kicking and screaming into the 21st century. With Ta Mère he has toured the UK and Europe, playing in venues such as Cafe de Paris, Pigalle Club, Village Underground, Old Vic Tunnels,  Hootananny, Green Note, The Elgin, Ginglik, and  festivals such as Glastonbury, Plough Jazz festival, Bimble Inn festival and others.

In 2010 he was featured as special guest in Blue Soup‘s second album, produced by top Canadian producer, Paul Milner. He also created the Red Jazz Asymphony Orchestra, a dynamic collective of jazz musicians.

In 2011, Christos worked with lyricist and fellow musician Fanis Margaronis in creating a short musical, addressing the recent and ongoing economic crisis, called “A Crisis Tango”. Christos composed and arranged all the music and Fanis wrote the libretto.

2012 found Christos working as a Musical Director, arranger and guitarist in Dr Schwamp. The project was launched in 2013 and toured Europe and the UK.

In 2015 Christos started the Avant-Garde Jazz trio Told Americans with Mike Seal and Kostas Bechlos. They have released an EP (Nub Music, 2016) and a LP (‘And The Grey Becomes One’, Nub Music, 2017) and they are currently writing their second full album. They feature an intense experimental sound with political overtones. 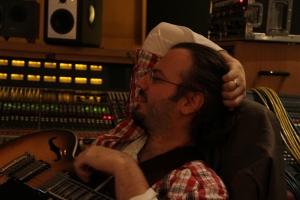 “[…] the simpatico musical backdrops from Christos Chatzispyrou (electric guitar, mandolin) and Kostas Bechlos (drums) are just brilliant, with never a note or nuance wasted. Told Americans possess an abundance of expert musicianship with energy, passion and a desire to truly experiment with preconceptions and push the artistic envelope to accurately express the ideas of the collective, and the result is unusual, stimulating and most invigorating.” FATEA